Dutch cheese export: The effects of the Russia/Ukraine conflict

In this article we look at the possible consequences of the Russian invasion of Ukraine. At the time of writing, the conflict is in full swing and although the situation is changing daily, the announced sanctions and price developments are already showing expected effects.

Export of cheese to the Ukraine grows quickly but remains limited

Exports of Dutch cheese to Ukraine have increased by an average of no less than 53% per year since 2016, but with a volume of 440,000 tonnes in the first 11 months of 2021 they remain limited in relation to total Dutch cheese exports. The country mainly imports the classic Dutch cheeses Maasdam, Gouda and Edam, with imports of Maasdam and Gouda in particular increasing strongly.

Part of Maasdam's export is probably due to Leerdammer, recently acquired by Lactalis: the sale of activities by Bel Group included the Ukrainian subsidiary Bel Shokta, which is responsible for the sale of Bel Group products in Ukraine. It is likely that trade with Ukraine will be severely restricted by the current situation, regardless of the final outcome of the conflict.

Graph 1: Cheese exports from the Netherlands to Ukraine, 1,000 tonnes and % of total cheese exports, 2021 trade up to and including November

The strong increase in volume of Dutch cheese exports to Ukraine is a stark contrast to Dutch trade with Russia: due to import restrictions introduced after the annexation of Crimea, dairy trade with Russia has been negligible since 2014.

Production costs rise due to rising gas and transport prices

The effect of the Russian invasion will be felt mainly in an increase in production costs for both dairy farmers and dairy products. A concrete example is the rising price of gas, which will make the energy-intensive processing of raw milk noticeably more expensive. The price of gas at the end of February was more than five times higher than at the same time of year in 2021. There is little chance that the full price increase will reach customers: the government has announced that it will compensate part of the cost through tax cuts, and many large consumers have concluded forward contracts to limit the effects of price fluctuations.

Nevertheless, energy costs will rise sharply in 2022. The same applies to transport costs: in addition to rising fuel prices, the logistics sector is facing disruptions in logistical supply lines and a shortage of personnel. It is expected that this staff shortage will only increase as part of the significant number of Ukrainian drivers working in Europe return home. Collectively, this will put further pressure on the already rising transport costs experienced by producers in the Netherlands.

Quantification of this effect

To quantify this effect, we look at the cost structure of the largest dairy producer in the Netherlands, Royal FrieslandCampina. The cooperation spent € 195 million on energy costs in 2021. In the same year, € 539 million was spent on transport costs. If we set this against the volume of milk supplied by members we see that FrieslandCampina spends around € 7.53 per 100 kg of raw milk on transport and energy costs. 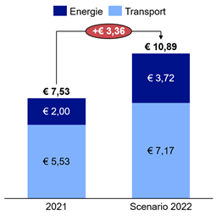 Graph 2: Costs of Royal FrieslandCampina for energy and transport, € per 100 kg of milk supplied by members

For an estimate of the cost inflation that both cost items may experience in 2022, we look at the CBS and the price increase of diesel in February. CBS calculated on 18 February, before the Russian invasion of Ukraine, that energy costs for households could increase by up to 86% in 2022. If this scenario were to become reality for large-scale consumers such as FrieslandCampina, it would mean that, with a stable milk volume, the dairy producer's energy costs would increase to € 3.72 per 100 kg.

For transport costs we look at the development of the diesel price, which in February was about 30% higher than a year earlier. If this high fuel price were to be passed on in full to customers for logistics services, this would mean transport costs for FrieslandCampina rising to € 7.17 per 100kg of raw milk. In this fictitious scenario the total production costs per 100kg of raw milk would increase by € 3.36, which would have to be compensated either by customers or farmers.

Another area where the Dutch dairy sector may be affected by the conflict in Ukraine is the cost of animal feed. Ukraine is by far the largest supplier of maize to the Netherlands, supplying around 3 million tonnes in 2020, or 51% of total imports, of this important ingredient for cattle feed. With this, the country supplied about 22% of the total amount of maize consumed in the Netherlands, with the peak of exports being in the first and fourth quarters of the year. Given the current situation in Ukraine, it is unlikely that the country will be able to supply similar volumes in the coming years, which will put pressure on the raw material costs for cattle feed producers. These costs will partly be passed on to the farmer, further increasing the cost of milk production.

In conclusion, despite the limited export volumes to both countries, the effect of the Russian invasion of Ukraine will be noticeable in the form of rising production costs for the Dutch dairy sector. With the relatively narrow margins for both dairy farmers and dairy producers, it is plausible and logical that part of these cost increases will be passed on to the consumer, who will therefore not only notice the effects of the conflict at the petrol pump, but also in the supermarket. The COVID-19 pandemic has impacted every industry on the planet over the last two years - and the dairy sector is certainly no exception. The maturity and... The European dairy industry has grown at an average annual rate of 7.7% between 2016 and 2019, according to the latest publication of our trendreport of the... Dairy industry facts: an analysis of growth and profitability

As we carefully say that COVID is on its return, it is time to recalibrate and take notice of the current state of the dairy industry. In previous years...